The world through the eyes of a cat, fish, spider and parrot: the network showed how different animals see the environment 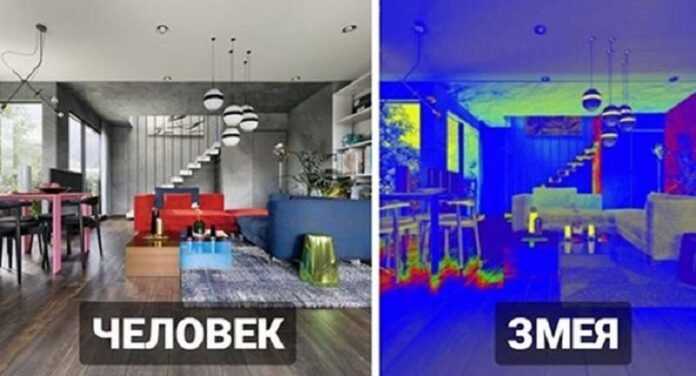 It's no secret that animals' vision is different from human's, so they see the world a little differently. But how?

To demonstrate this visually, HomeAdvisor created an interesting project: a virtual room in which there are 7 animals, and showed how each of them sees this room.

How do your animals see your house?

In this room you can find 7 animals: a dog, a cat, an aquarium fish, a spider, a snake, a parrot and a chameleon. Next, you will see how this room looks from the point of view of each of them, you can also compare this with how a person sees it.

Room through the eyes of a dog

The dog sees the room in pastel colors, in her eyes there are cones that are sensitive to blue and yellow, but those that should be sensitive to red.

Cats see well in low light. Their field of vision is wider than that of humans (200 degrees versus 180), but not as wide as that of dogs. The ability to distinguish colors is somewhere in the middle between a dog and a human: they distinguish between blue, yellow and a little green.

This is how a person sees

Pisces see more colors than humans and have the ability to detect ultraviolet light. This helps their vision in the water. In addition, there is an effect, like in a fisheye lens (it is not for nothing that it is called that).

Snakes see pretty poorly in daylight. Some species have infrared vision, that is, she sees something like a thermal imager. By the way, we have a post about how familiar objects look on its screen.

Even eight eyes do not help spiders, and they see as if they have very strong myopia. Their hairy paws help them navigate.

From a human point of view

From the point of view of the parrot

The world through the eyes of a parrot is as bright as its plumage. They capture ultraviolet, blue, green and red color ranges, the outlook is 300 degrees. Also, a bird can focus on an object with one eye while the other wanders. And a parrot can also narrow the pupils of its own accord.

Most of all, the choice of colors in your living room will excite the chameleon. After all, he not only sees colors, but also changes his color. Chameleons see many colors, including the ultraviolet spectrum, but not as much contrast. The field of view of the chameleon is 342 degrees.

We saw the room through the eyes of animals and humans from different points, and now let's look at the same picture:

Room view from above

HomeAdvisor is a digital marketplace that connects homeowners with preselected local professionals to complete home improvement, maintenance and renovation projects. They also often show entertaining interior design projects. For example, this one, which shows how the interior of the kitchen has changed over the course of 500 years.