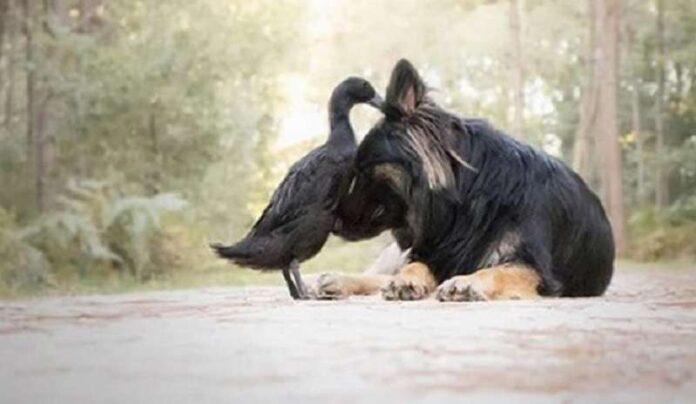 A popular French photographer named Natasha, who works under the creative pseudonym Xuamina, dedicated her blog to her unusual wards. The thing is that she has a big dark shepherd dog named Vendetta … And an ordinary duck, which the woman named Lemony.

As a child, Natasha dreamed of getting a duck and going on a big trip with her. Now, when the woman has matured, she decided to fulfill her cherished dream.

She talks about her small trips in the company of Vendetta and Lemony on Instagram of the same name. Duck and dog are amazingly friendly. They bathe together and love to walk in nature.

but such a connection appeared immediately: Vendetta and Natasha found Lemony with a broken leg during one of the walks. Surprisingly, the bird quickly became attached to its rescuers and began to show itself as an excellent companion.

Now Natasha believes that ducks underestimated as pets. She devoted many texts to this problem. “Ducks are not only foie gras,” says a Frenchwoman.

However, so far, few people have followed her example: keeping a duck, and even more so traveling with it, is quite difficult.

Now more than a thousand people follow the life of an unusual company. And their number is constantly growing!

Facebook
Twitter
WhatsApp
VK
Previous articleA homeless dog sneaks into the couple's wedding – and becomes part of their family
Next article15 funny photos of huge dogs, which in their imagination remained touching puppies