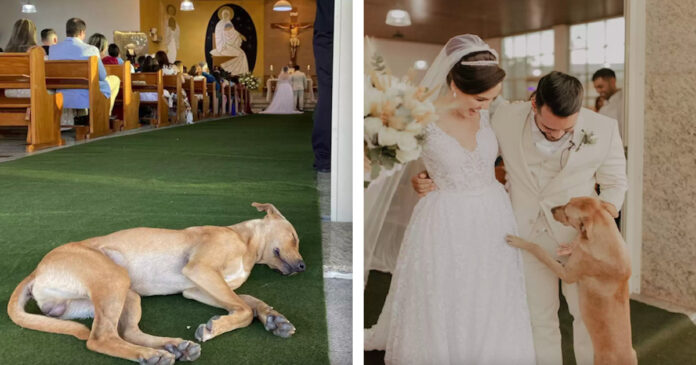 The day Douglas Robert and Tamíris Muzini got married, their family grew by one member. Interestingly, the new member was not at all what the couple expected. It was someone they just met.

An unexpected guest at the wedding

When the beaming bride arrived at a church in Brazil where the wedding was to be held, she noticed a stray dog among the gathered guests. The quadruped was there by accident, but for Tamíris Muzini he was the perfect wedding fan!

I was surprised. There was a dog in the church! My heart melted at the sight of him. Says Tamíris Muzini.

When the ceremony began, the dog was not going anywhere. From the side he watched Tamíris and Douglas take an oath to each other.

When the ceremony is over and the couple officially married, the sweet doggy was very excited. As Tamíris and her husband left the church, the four-legged friend greeted them affectionately! The newlyweds were very touched by this.

It was like he was saying, “Please take me home with you.” – admitted Tamíris Muzini.

… and this request was quickly granted!

At this point, Tamíris and her husband decided to adopt the dog. It turned out that this day was not only great for them, but also for a cute four-legged friend!

It was not an easy road

The couple named the dog Braiá Caramelo, promising him love and care to his last days. Judging from the wounds on the pet's body, the path he went through was not easy – but luckily it was all behind him.

He is so loving. Despite everything he has been through, he still believes in the goodness of people. He gives us hope every day. Said Tamíris Muzini.

“This he adopted us ”

Braiá Caramelo has settled in well in his new home. Many years of joy are waiting for all three of them, and the dog has found his happy ending.

He is very happy, energetic and full of life. In fact, he adopted us. – added Tamíris Muzini.