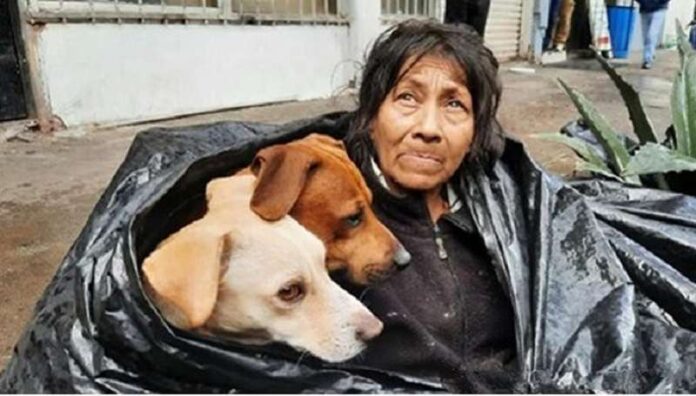 The woman, whom the inhabitants of the Mexican city of Tijuana called Hole, is 65 years old. But she lives in a completely different way than an ordinary pensioner.

Hole's life turned out so that she ended up on the street.

A pack of dogs spent many years with her, whom Hole treated and fed with the last means.

At night, the woman slept with animals that warmed her with their bodies. They all huddled in a huge garbage bag. When the local police finally showed attention to the Mexican woman's problem, she flatly refused to go with them.

No, she doesn't romanticize her street lifestyle. She fears for her furry friends. Moreover, one of the dogs in the near future should give birth to puppies, and Hole was afraid to leave the young mother and her babies to the mercy of fate.

As a result, the police and Hole agreed on a compromise: the woman began to go to spend the night in a special center where there is warmth and a normal bed. Then the woman met a volunteer named Alejandra Cordova Castro.

Castro understood that Hole would never leave her four-legged wards, so she began to look for compromise solutions. First, she bought all the necessary things for the woman: a normal mattress, water bottles, warm socks and long-awaited dog food.

Secondly, she arranged for Hole to move to a special tent shelter. Now the woman has at least some kind of roof over her head, and her dogs remain nearby. A day at this camp costs just 50 pesos, like a cup of cheap coffee.

Hole's story has made headlines in the local media and social media. Now the woman hopes that she will be able to open a shelter for her pets and begin to lead an absolutely normal life, and Alejandra continues to think about how to realize this dream of Hole.