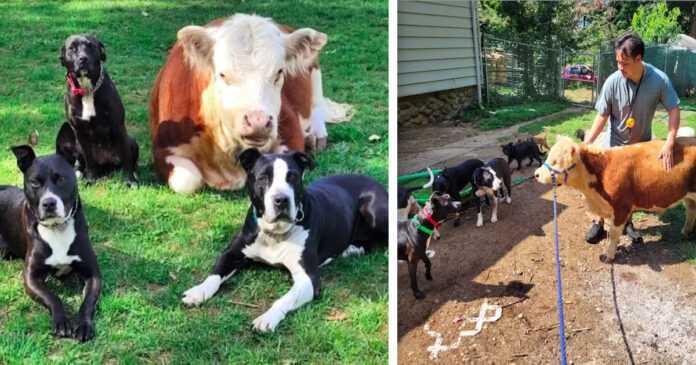 The miniature cow named Haru never fit into her herd. It was much smaller than the other specimens, so it was not accepted by them and spent a lot of time alone. However, everything changed when she met her new best friends – a group of dogs.

A cow that befriended a team of dogs

Amber Sullivan-Vo and her husband Anthony found out about Haru in a Facebook post and decided to save him. They wanted him to join their crew, but weren't sure if the lone miniature cow would get along with their nine dogs. However, when they introduced Haru to the four-legged friends, all their fears vanished.

Haru not only gets along very well with dogs, but also behaves like them. The little cow sniffs the new quadrupeds that temporarily end up under his family's roof, as if he were a dog himself!

He lowers his head when other dogs are around to play with them or give them a kiss. Says Amber Sullivan-Vo.

And although Haru weighs a little more than his canine siblings, he is always careful when interacting so as not to hurt smaller than self creation zoot. When his family started raising a couple of puppies, he also took care of them.

He is very aware of his height. If, while playing, he sees the dogs gone outside, he quickly calms down and stops running. – explains Amber Sullivan-Vo.

Haru's parents cannot imagine their lives without him. And although it might have been too small before, it is just the perfect size for its family members!