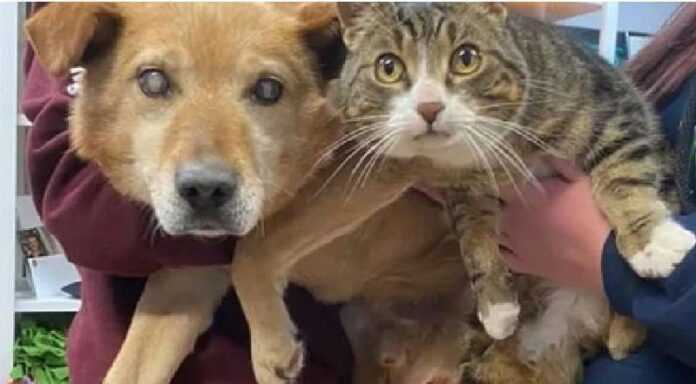 In the Canadian animal shelter Saving Grace Animal Society in Alberta, once there was a strange and touching couple: eight-year-old dog Spike and the most ordinary cat Max. And everything would be fine, but Spike was blind.

And the cat, the most ordinary, without a pedigree, volunteered to be a guide for Spike. They ended up in Saving Grace Animal Society after they were taken away from the previous owner, who did not cope with his duties in maintaining them.

Neighbors drew attention to this couple, who saw that Spike and Max lived in an open enclosure, only partly covered with a roof. And they were very cold in winter. So that they slept only, closely clinging to each other to keep warm. Even when they were taken away from there, they left this inhospitable place shoulder to shoulder. does not leave the dog, leading it along the safest routes and helping to navigate in space with the help of non-verbal signs that have long been developed between them: short or long purring, touching with a splash or paw, a drawn-out “Meow” or hissing.

Therefore, when the issue of an outbuilding arose, there was no other opinion how not to separate the visually impaired and his voluntary guide. . A photo of this couple was posted on the Web, and almost immediately offers began to come from those who wanted to arrange custody of them. According to the results of the competition, the best applicant was chosen, and Spike and Max finally changed their place of residence, finding their Home and their Person.

Now they know what is human care, and most importantly – will remain inseparable