The owner left the dog in the park, tying him in a bench, and left a note next to him 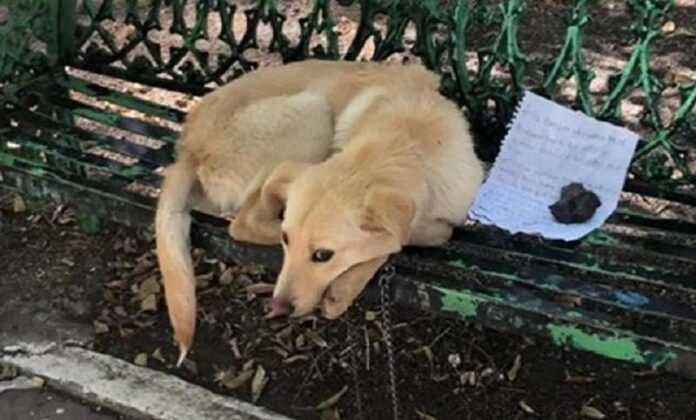 In Spain, in one of the parks on a bench, passers-by found a tied dog. He was scared and aggressive, and there was a note next to him. After reading it, it became clear that the fate of an abandoned dog is not easy.

An employee of a non-profit foundation dedicated to saving homeless animals received an alarm at the end of last year 2020 that a dog had been found tied to a bench in the park. Marcela Goldberg immediately went to the place and found a young dog, practically a puppy. People were already crowding around, trying to get close to the dog and feed him. But the dog was aggressive, very nervous and did not let anyone near him. Even Marcela could not approach her, afraid of being bitten.

Next to the dog on a bench lay a piece of paper, crushed by a stone. On it, the volunteer noticed a note. The text said that the dog's name was Max. The owner was forced to do just that and abandon the pet, as members of his family treated the animal badly. The owner was sorry and asked whoever found the note to take care of the fate of the dog. The fund employees considered that the text was written by a teenager or a child, as the handwriting was not very neat.

Marcela, after unsuccessful attempts to approach Max, turned to the cynologist, who helped to untie the dog from the bench, replace the rope with a leash and move the dog to the car. All these steps took about two hours. The specialist noted that the reason for this behavior is not aggression, but the strong fear experienced by the defenseless and offended puppy.

In the car, Max huddled under the seat, but gradually adapted. He was sent for temporary overexposure to a specially equipped garage. There, the animal finally got used to people and stopped behaving aggressively. For six days, Max was trained, mastered the basic commands and learned to interact with the people around him and other animals.

Max was given a new nickname. Now his name is Boston and he is starting a new life. The dog is active, good-natured and sociable. Volunteers are looking for new owners for him, preferably people with experience and the presence of a pet. Boston also loves children very much, so a child in a new home will be a big plus.