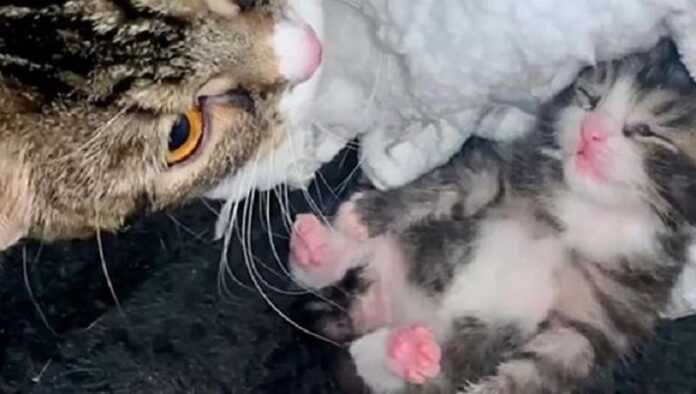 In the spring everything comes to life, a new life begins, but not all of it comes into the world easily and safely. In Montreal, Canada, they successfully celebrated the completion of the most difficult stage in the rescue of the young cat Gizel, for whom the first birth turned into such a drama that not every writer of women's novels would think of it. And the fault of everything, as usual, is people.

Pregnant cat Gizel ended up on the street at the end of winter, because she was just … thrown out

Gisel calmly lived the first year of her life, but careless owners did not take care of either sterilization or looking after the cat. As a result, she became pregnant, and when it turned out, Gizel was literally thrown into the snow, at 10-degree frost. No one needs it and let it all end quickly. The cat was incredibly lucky that a neighbor girl saw it, who picked it up and took it to her friend who works at the shelter. So Gizel fell into caring hands, but new problems were already rolling downhill.

Pruno was the first, and became the only kitten of Gizel. While the veterinarians were touched by the lively baby, the second was born dead. And the third one too. The birth stopped, Gizel fell into apathy, stopped eating and, even worse, completely ignored Pruno, who needed maternal care.

While some volunteers took turns feeding and warming the kitten, others were racking their brains — what happened to Gizel? X-rays showed that two unborn kittens remained in the womb of the cat, because of which she developed an infection and poisoning. Urgent operation! Only a day later, Gizel was able to gain strength and eat a little. Baby Pruno has been separated from his mother for the third day already.

The red vest is a necessary measure. Gizel cannot be fed milk to Pruno, it has become toxic.

A person, with all his will, cannot replace his mother for a kitten, but Gizel is given strong medicines to suppress the infection , because of which her milk is deadly for a kitten. Solomon's decision was made – people will feed Pruno, but Gizel herself will be able to warm and care.

The cat was incredibly happy to meet kitten!

Stock up on handkerchiefs – the video is very touching

Since then, Pruno has doubled his weight and has already opened his eyes. Gisel is also on the mend. She must be sterilized so that such stories never repeat.