Roadside kitten turned into the cutest cat and fulfilled his dream 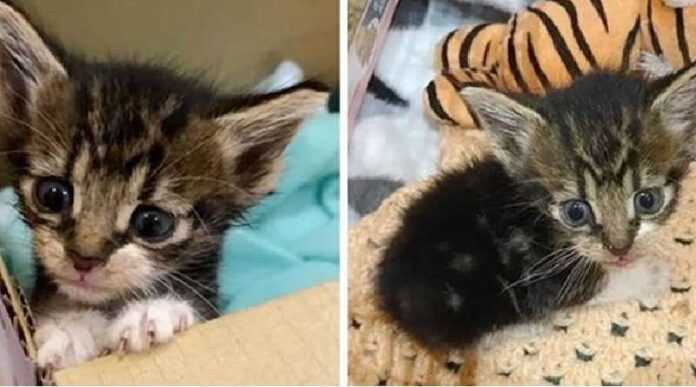 The life of a tiny kitten picked up on the roadside is turned upside down thanks to an act of mercy.

Stanley the kitten was found on the roadside – he was still trying to drink the milk of his mother, who, unfortunately, fell victim to car traffic . The kid was emaciated and extremely small for his age, but he held on with all his might.

A kind person who saw a kitten brought it to the animal rights activists (Perth, Australia). “Stanley was supposedly about six weeks old, but he weighed only 188 g (for comparison, not every one-week-old kitten weighs so little),” animal activists say.

In a word, everything was against him, but the kid refused to give up.

short and retarded, his head seemed larger than his tiny body.

It was difficult for the weak kitten to eat on his own. The rescuers kept him warm and slowly fed him small portions. Shelter volunteer Amber took him into her care and began to syringe feed him every hour of the day.

“Very weak, he soon fell into a coma-like state. By the time the other caregiver stabilized him and sent him to me, the kitten was revived and energized again,” says Amber.

Luckily, little Stanley gained some weight and got back on his feet.

Barely getting stronger, he did not fail to try to get out of the nest, and also very loudly declared that he wanted something.

“As soon as he heard voices, he began to scream and jumped out of his little carrier to feed. The strength of the struggle is great in him. He was confident and loving from day one,” says Amber.

About a week later, the kitten no longer needed a syringe, as he began to eat from a plate on his own. Amber let out a sigh of relief.

“He gradually recovered, began to play and show signs that everything would be fine with him all right,” the rescuers write.

The persistent baby coped with the strongest difficulties, and now nothing could stop him.

Even remaining so small, he had a strong personality and will to live.

In three weeks, Stanley more than tripled his weight, grew to his ears and even got a nice plump tummy.

Everyone was terribly proud of him, and it was time him to socialize, that is, to get acquainted with other kittens.

Stanley was introduced to a pair of female kittens picked up on the street.

“They were three weeks younger than Stanley and came into care shortly before him at the age of two weeks,” the rescuers add.

Black and white Cleo and Stanley quickly hit it off and became very close. They formed a dynamic duo with games, fights and running around the room.

Stanley was a late bloomer and needed extra time to catch up. With the love and support of his best friend Cleo, he has achieved incredible success and developed as a person.

“Very quickly we realized that they were wonderful together, and we need to attach them to the same good hands.”

Dear lady named Nikki stumbled upon this adorable couple and fell head over heels in love. When Stanley and Cleo's stay ended, they went home with Nikki and her family – the kittens' dream came true.

“Stanley and Cleo are now Gizmo and Ninja Bobbleheads. The family loves them. They love to play, cuddle, and are already looking forward to how great they will spend the rest of their lives together!”.