Retriever Jubjib is the best durian collector in the world 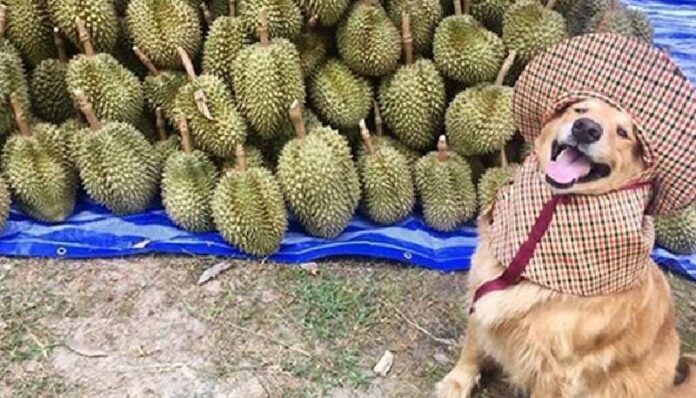 Some people go to Thailand specifically to taste the legendary durian fruit. But most will not risk it – this thing is painfully smelly.

However, everything changes when Jubjib, a golden retriever with an incredible smile, who has been collecting and advertising durians for years!

How can you not believe such a gentleman that durians are delicious?

It all started in 2014, when Jubjib was still a puppy. His first harvest.

Of course, he does not collect durians directly. But it serves as an excellent motivator for workers!

That was a brilliant idea – dress the dog in a hat and a poncho!

Every year outfits change, only the sincere smile of Jubjib is unchanged!

Now Jubjib is a local celebrity, the beauty and pride of the durian farm. He has his own pages on social networks, his image has become a trademark logo, they make reports about the dog. And every year, when harvest time comes, Jubjib is in demand like no other. It is understandable – next to such a handsome optimist, it works much better!

photoshoots are the most intriguing thing

Obviously, the dog is in his place and in business!

I just want to buy a whole basket of durians from him at once!

Successful and fruitful work, Jubjib. I wonder how his subtle sense of smell reacts to the smell of durian?

Facebook
Twitter
WhatsApp
VK
Previous articleParalyzed female dog in the garbage dump. The guardian cruelly wanted to get rid of her
Next articleAnimals that uplift even the darkest day