How a kitten, having become attached to a domestic cat, ceased to be homeless 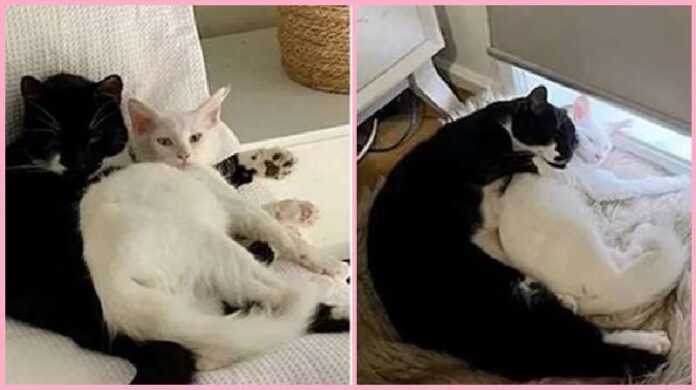 It is not known how this charming fluffy kitten was left alone: did his mother lose him, did his negligent owners throw him away …

But in life he was very lucky, because on the way of the baby he met Alice McCall: near her house the cat mewed plaintively.

The woman decided to help the unfortunate animal as much as possible: she began to leave food for him. Alice's first cat, named Audrey, also noticed the new ward. He quickly became friends with the baby, as the hostess later realized, he lacked interaction with his own kind and he was glad to find a friend.

The first meeting of Audrey and the unfortunate kitten was especially touching: Audrey stretched out his paw over the fence, as if trying to shake hands and at the same time fearing Alice's reaction.

Seeing this cute scene, the hostess decided to let the homeless cat into her area. Then Audrey began to lick his new friend, run around him and in every possible way express happiness from their acquaintance. All day the kitten, whom Alice later named Agra, explored the yard.

A young cat, and the tramp turned out to be a girl, was not at all afraid to explore new places and repeated everything after her older comrade.

And Alice just couldn't get the poor animal back off the lot. The woman says that she would never take a second cat, but it seems that her first one decided everything for her.