Two abandoned kittens support each other, and eventually turn into beautiful cats – together 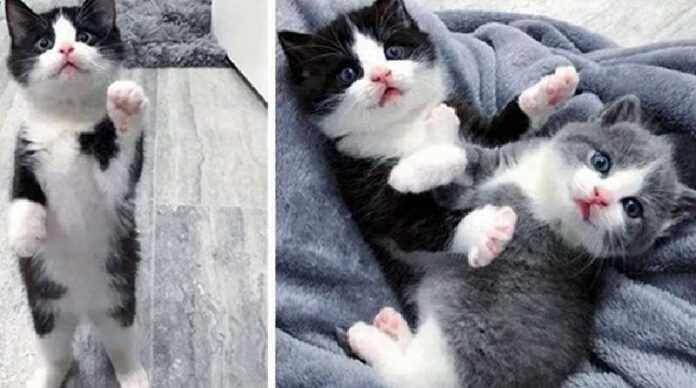 Two kittens have never left each other since they were rescued. Together they blossomed into luxurious cats.

Melissa, founder of Tiny but Mighty Kitten Rescue (Ontario, Canada) found information on the Internet about two kittens in trouble. They were only four weeks old, and their mother left them. . That same morning, I went to Alexandria and took these babies,” says Melissa.

By that time, the kittens , covered with mud, already very hungry. When they were fed, they settled down together in a warm bed, purred and fell asleep.

Kittens Ace (black and white) and Indy (gray) quickly settled in a new home. After a thorough bath, it turned out that both are very fluffy.

Having received a roof over their heads, the kittens became liberated and even began to explore everything. Soon Melissa noticed a special connection between them.

Like two pair of boots, they did not separate at all.

As the kittens grew larger, so did their appetite. Every two hours, the brother and sister demanded their bottles and ate to satiety.

If Ace started crying for food or a snack, then Indy followed suit, and they yelled in a duet.

Ace is a brave man with inexhaustible energy. Indy follows in his footsteps, not wanting to miss anything. Usually, furiously frisked, the pussies cuddled up, gaining strength before the next round. Indy purrs so hard his head shakes (when they doze),” says Melissa.

When the time came, the brother and sister simultaneously switched to solid food from the bowl, side side by side, as if encouraging each other.

If they don’t eat and don’t sleep, then they jump around the kitten room and misbehave until they get tired.

Watch Ace and Indy in the video:

They like to do everything as a duet, even go to the tray. All the time next to each other and rub against each other.

Melissa upgraded their room with a new cat climbing frame. Immediately, two fluffy beasts flew up and huddled together.

Indy is a sassy princess who loves to kiss, and Ace is a fearless boy who does not seem to have a pause button when he plays.

Ace loves his sister so much that when she is not around, he starts looking.

“(One day) I took Indy upstairs to quickly grab something for the kitty room, so Ace started screaming at the top of his lungs!”.

“When they were spayed and neutered, the operations themselves were not the hardest part of the day. The problem was to keep them isolated from each other, in different carriers (at the vet),” Melissa adds.

“After returning home, they were happy that they were together again.”

When it's time to put them in good hands , Melissa had no doubt: brother and sister are an inseparable set. A little later, a suitable family was found, who gladly took both of them to their house.

I realized that this is the perfect match. How happy I was for these two sweethearts!” Melissa says.

Ace and Idny are now quite big, but in some ways they are completely have not changed.

“These two do not live one without the other. They always need to be there to fall asleep,” their owners say.

“They play to exhaustion, sleep heartily and always together. “

Facebook
Twitter
WhatsApp
VK
Previous articleThey rushed to help five bull terriers, but were shocked on the spot. They had to call for reinforcements
Next articleEvidence that pets act like humans