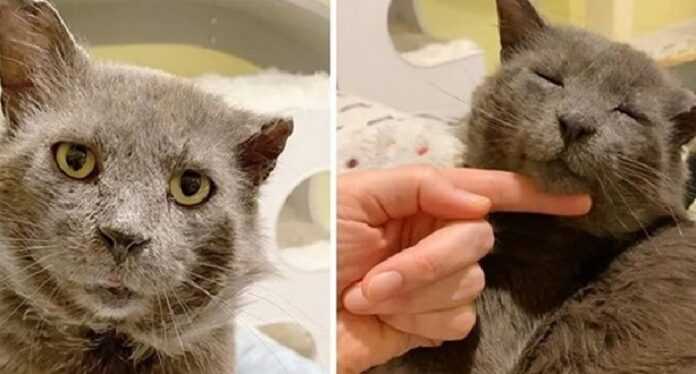 The rescuers got a cat, stern in appearance, but very kind inside.

Mason the cat came to the Lost Dog and Cat Rescue Foundation (in Virginia) from a rural shelter in North Carolina. He was covered in battle scars, with a shriveled ear, and many health problems. When she came to see him, she was struck by his condition.

“Both of his ears are deformed and torn. Deep scars on both sides of the muzzle, a terribly advanced cold, broken and decaying teeth, hair falling out in tatters and a swollen hind leg, ”says Jen.

For all that, Mason clung to Jen's hand, when she reached out to pet him. From the very beginning it was clear that the cat wanted to live and wanted someone to love.

Jen took him home for foster care to begin treatment in comfort. “When he arrived, he was dirty, greasy, timid and underweight. He hid, hearing that we were approaching, and only looked out, determining whether we should be afraid. But, as soon as he decided that it was not worth it, he stuck to us, as if electrified. ”

While Mason was recovering, he acted exceptionally sweet and only wanted to be taken care of, stroked, combed and talked to him all the time.

It was worth Jen to sit on the sofa, he resorted to flirting and even started thoughtful conversations.

“Mason discovered that there is nothing better than caress, and greedily caught any touch (including scratching his tummy), never interrupting them,” Jen says.

a very sweet, gentle elderly teddy bear who, more than anything else, wants to be loved and caressed.

Due care, good food and love did their job – Mason became better in health. Increased appetite. He felt more confident and comfortable, even started to play.

Watch cute Mason in the video:

During the re-examination, the veterinarians determined that the lump on the cat's leg was a poorly healed old injury.

“Doctors suggested that poor Mason hit something with his foot, got stuck, but managed to get out.”

Mason's life before the rescue was not easy, but now love and comfort ahead of him. “He looks very stern, but I can confidently call him one of the cutest cats I have ever met,” says Jen.

“In himself there is not a drop of severity. He's just a guy who had to toughen up to survive in a harsh world.

Over the past weeks, Mason's fur has become softer and shiny. The cat gained weight and became more energetic. “Now he waits for us at the door when we come home from work. Completely changed.”

Mason endlessly enjoys spending time with people. He reaches out to hug them, catches every stroke and touch on his stomach, and falling asleep, purrs.

“We are glad that he is with us. We know we can get him into great shape and then he will find a loving permanent family.”

Facebook
Twitter
WhatsApp
VK
Previous articleUnusual scene in the restaurant. The man was on the sweetest date with his dog
Next article20 animals that act like a magic pill for good mood