The cat was taken to the shelter because of his love to sit on the lap of the owner, but he found a new family 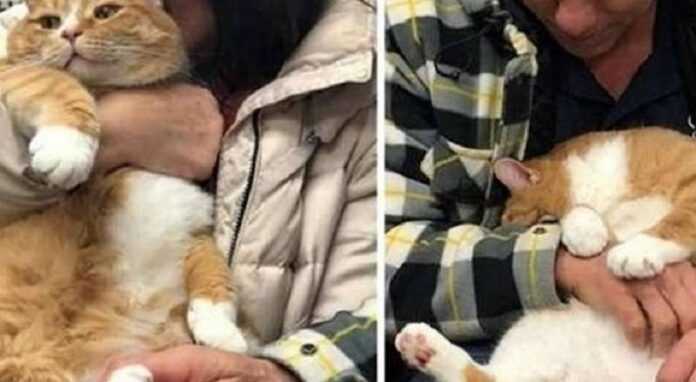 Why does an ordinary person need a cat in the house? It is right to love him, stroke him, hold him in your arms, caress him, feel his warmth and comfort, hear his purr. And if the cat itself answers the same to its owner, then this is generally an ideal combination.

But it turned out that not everyone shares this belief. This well-fed handsome redhead named Jacques from Montreal (Canada) was given by his own owners to the local Michigan Cat Rescue shelter and they explained the act by saying that the cat is too tame, too dependent on the attention of the owners, and that he especially loves to sit on the master's lap.

“All Jacques wanted was to sit in a warm spot on his master's body. But they didn't want it. They didn’t want to cuddle with him and didn’t want to have such a cat in the house at all, ”says one of the Michigan Cat Rescue employees.

Jacques spent a whole year in the shelter and they couldn’t find a new family for him . Even at the orphanage, Jacques desperately sought human companionship and was always ready to curl up on the workers' laps.

In an attempt to find new owners for Jacques, the shelter staff decided to hold a campaign on their Facebook page. They published a photo and story of Jacques, mentioning that he is very tame and very affectionate and because of this, did not please the old owners.

The reaction of the users was not long in coming. People were amazed and outraged that someone would abandon a cat for such a reason.

“A giant ginger cat that loves to sit on your lap and cuddle? Looks like my dream has come true!”.

“If this is a cat that loves to sleep on your lap, then this is exactly what I'm looking for!”.

In total, more than 1200 comments were left for the post and it earned more than 2600 likes. People wished Jacques to find a new family as soon as possible and offered themselves as a new owner for him.

After two weeks, the shelter staff finally chose a host for Jacques, a woman named Liz. She and her family came to the shelter for the cat and immediately took him in their arms and Jacques happily sat on Liz's lap and hugged her, purring loudly.

Then Jacques also lay down sweetly on the lap of Liz's husband.

“Finally, our cute and spoiled cat has found a new home. Now he lives with Liz and her family and we are all very happy for him. he settled in very quickly and also made friends with another cat, and he also liked to sit in the arms of his 3-year-old grandson Liz, who adores his new pet. He also came up with a new name for the cat and calls him Joe.

Facebook
Twitter
WhatsApp
VK
Previous article15 photos of funny and silly dogs, when looking at which it is simply impossible not to smile
Next article15 photos that show what our cats think of us