How did the extraordinary friendship of a lynx and a cat, which lasted 12 years, end? 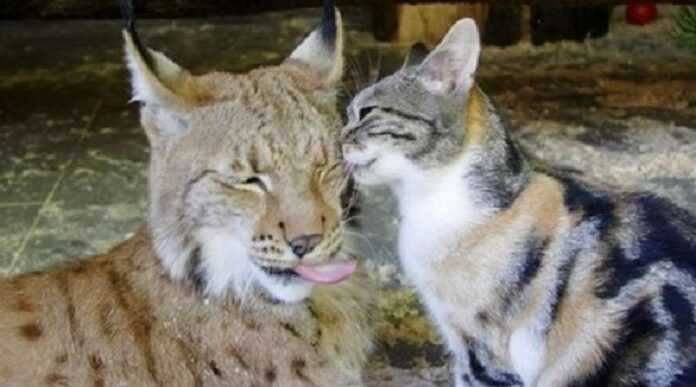 Everyone who visited the Leningrad Zoo thought more than once about an enclosure with a lynx. The fact is that next to a huge cat one could notice a completely ordinary one!

This amazing neighborhood does not shock the employees at all zoo, because the story began back in 2007.

In 2007, a two-month-old lynx named Linda appeared in the zoo. Like any real kitten, she loved to play. This is how the interspecies friendship began: the zoo staff placed a two-month-old cat named Dusya with Linda.

Zoologists closely observed how the wards of the Leningrad Zoo behave. At first, the cats were wary, but over time they got used to each other. They began to be quietly left alone in the aviary.

Large and little cats have become favorites of all visitors. They even participated in a special program for children and parents. But if Dusya enjoyed the attention and fawned over people, Linda did not like the increased attention at all. Therefore, the program was quickly curtailed.

Linda, with age generally become less sociable. Increasingly, cats spent time separately from each other: Dusia has access to her own aviary, where the second cat simply does not fit.

And since summer, Linda has been left alone. Dusya died due to a stroke and zoologists did not find anyone capable of replacing the former company.

Facebook
Twitter
WhatsApp
VK
Previous articleHe couldn't find his artificial jaw anywhere. When he looked at the dog, he laughed
Next article15 animals that will cheer you up even on the worst day