Greyhound and German Shepherd fell in love, and they had a wonderful puppy 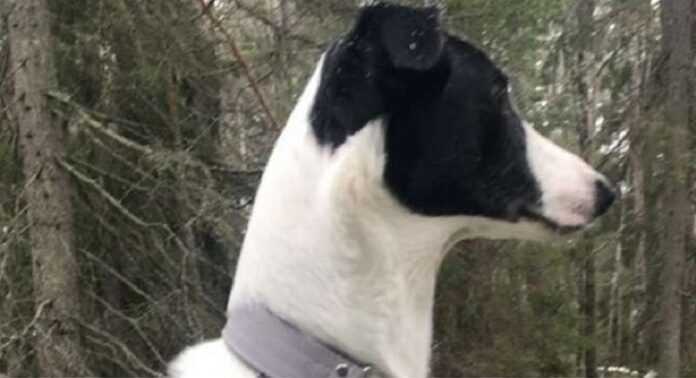 Nature obviously has a great sense of humor. She demonstrated it by showing the world an unusual puppy that simultaneously resembles a giraffe, a llama and an amazing mythical creature.

But the answer is the secrets of the origin of this animal turned out to be more simple and banal.

The dog's name is Gatsby, the Great Gatsby to be precise. And he has a very unusual appearance. And it's not about mutations and not about the intervention of aliens. Everything is more simple and banal: Gatsby has an interesting set of genes, because his parents are a strong German shepherd and a stately Russian greyhound. A non-standard mixture that gave an unexpected result.

From the greyhound, Gatsby received an incredibly long graceful neck, a pointed aristocratic muzzle, a black and white color resembling a tailcoat or tuxedo, and like model long paws. And from the shepherd, the dog got a very strong physique and a well-developed body. As for the character, Gatsby has a very good one: the dog is smart and quick-witted, perfectly trainable.

The story of Gatsby began two years ago, when unusual puppies were born to a shepherd mother. In early childhood, they looked like their mother, but as they grew older, they began to take on completely different features.

The owners of the whelping dog filed advertisements for the sale, and almost immediately there were those who wanted one of the puppies. A month later, the baby was taken away, calling him the Great Gatsby for his conspicuous stately posture and color in the form of a black tuxedo.

The owners of Gatsby created separate accounts for him on TikTok and Instagram. The dog immediately became a favorite, and videos with him collected thousands of likes and became viral. Subscribers are happy to follow the life of an unusual Gatsby. And he, despite his aristocratic appearance, is not arrogant at all and does not suffer from star disease.

Gatsby is active and frisky, he clearly executes many commands, and also demonstrates excellent success in the so-called nosework – searching for objects and people by smell. He instantly picks up the trail and is not distracted by garbage, various goodies, and even charming female dogs. and a friend for the dog. And an aristocrat will surely be able to find a common language with an ordinary fellow, at least the owner is sure of this.

Facebook
Twitter
WhatsApp
VK
Previous articleA unique dog from the shelter loves to cuddle with his collection of plush toys
Next articleThe dog, who has been missing for 2 long years, cannot believe that he sees his beloved family again