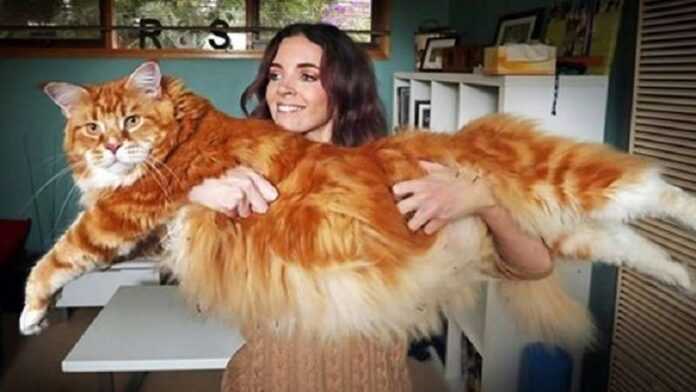 All cat lovers at least once dreamed of stroking a tiger. Or a lion. Or a snow leopard. Well, or any other big cat that you just can’t pet – after all, each of them is a huge paradise on their paws! Fortunately, we have domestic cats, which are just as beautiful. Only small ones.

However, in nature there are compromise options. Today we want to show you those Murzik breeds that in size they are as close as possible to real tigers and lions, only they (most likely) will also agree to live with you, without biting off other people's limbs for fun.

A prominent representative of this breed of cats is Merlin, who looks at everyone around him exactly the way they do deserve it. But in general, this type of cat is distinguished by its mild character – ragdolls are able to completely relax on the handles of a person, which is what their name says (ragdoll from English – “rag doll”).

Despite the name of the breed, these kisuls live quietly in apartments and do not beg their owners urgently take them to the Norwegian forest. But still, it is worth giving them the opportunity to take a walk more often, as they are very energetic and love open spaces. Norwegians are patient, ready to serve as exemplary mousers and very friendly at the same time. Of the funny features of the breed, it is worth noting that only its representatives descend from the tree head down. So they have it.

One of the oldest cat breeds on the planet. According to legend, the British are the descendants of the same Cheshire cat. And these handsome men calmly live up to 20 years and very rarely (compared to other cats) meow, attracting the attention of people. In general, they calmly endure loneliness and know how to entertain themselves in the absence of their two-legged slaves.

This breed of cat with many variations of the name was bred by crossing a reed cat and a domestic cat. Housei love to jump, climb trees and hunt everyone and everything. This type of cat is so rare that the world has yet to study them. It is only known that they are friendly, treat other pets well and love to travel very much!

These lovely creatures differ from other cats in that they are good get along with other pets, even dogs (and they love children, provided that they do not torment them too much). Vans are very active and inquisitive – all the shelves in your house will be conquered, and all the toys will be played. They especially like to catch objects on the fly, making amazing pirouettes in the air. As you understand, these Turkish guys would rather sit on your shoulders than wallow on your knees. So play with them more!

This breed is considered the national Russian cat. Surprisingly, they are dog-like in nature. Yes Yes! They become attached to only one owner, follow him, miss him, protect him from rodents and meet him at the door with a loving look. Although they may not get along with another dog (already a real one) – competition for the attention of the owner, after all. a person is busy, then he simply will not climb to him. Such behavior of the CAT causes only admiration. And also this breed of seals is recognized as hypoallergenic – yes, they are ideal, after all!

These short-haired Frenchies are the most jealous cats in the world – they do not tolerate rival pets in any way. If there is chartreuse in the family, then there is ONLY chartreuse in the family! They have the same attitude towards their favorite place in the house – try to take it! By nature, the Chartreuse are endowed with a very weak voice (although they purr from the heart – you can hear it in the next room). But in contrast to the vocal data, these cats, as you already understood, are gifted with a steel character that will have to be reckoned with.

These spotted beauties (mix of serval and domestic cat) have not only grandiose for domestic cats, the size, but also the cost – from 1.5 thousand to 50 thousand dollars. Few people know, but one of the reasons why breeders decided to breed this breed is the desire to reduce the number of suffering leopards and cheetahs, which for some reason all the rich keep at home. But the savannah will not suffer – in their character (like Siberian cats) there is an uncompromising loyalty to their people.

They are notable anglers, although they do not like water . Representatives of this breed are very fond of active games, including the pursuit of a toy with a further return to its owner (don't you think that the bigger the cat, the more dog features it has?). And look at the characteristic bobtail tail – it is surprisingly short (3-8 cm).

you breed Maine Coon – classic big men with tassels on the ears, which reach a meter (and even more) in length. In addition to their appearance of strict bosses of large corporations, Maine Coons have another feature unusual for cats: they love water. And not to drink, but to be in it.