WOJSIŁKA – an insect resembling a scorpion. It really exists! 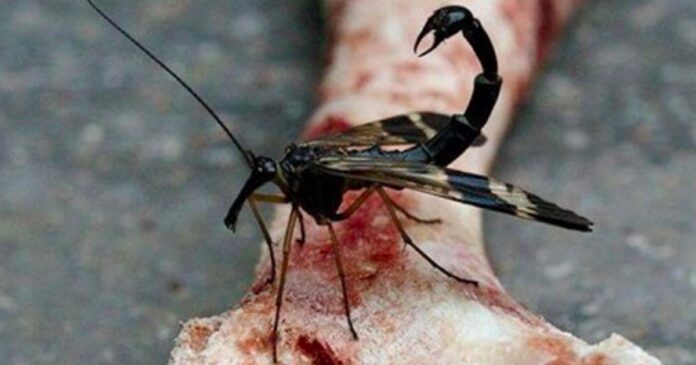 Wojsiłka looks like a horror movie, but it really exists. It may be scary, but these insects resemble flying scorpions!

Some people call these insects scorpion-flies. All because of their appearance. Wojsiłki have an enlarged abdomen and genitals. The end of the males' abdomen is bent upwards and takes the form of a scorpion's sting. Their terrifying appearance is emphasized by the double set of wings and the tucked up hind limbs, which they use to catch prey.

Currently, there are about 600 species of these insects in the world. Most of them inhabit the zones of temperate and subtropical climate. There are 21 species in Europe, and 10 in Poland. Most often they can be found near streams, bushes and trees. The largest species reach up to 3.5 cm in length.

Wojsiłka – is it dangerous to people?

These insects fly slowly and uncertainly. Fortunately, despite their frightening appearance, they do not harm people. Their rituals, however, are as shocking as their appearance.

Females choose mates based on the gift they are offered – usually dead worms. Females feed on them during reproduction. So it is a snack during sex. They usually live in single couples. Romantic, right?

Insects of this species are usually the first to be found on a dead human body. It happened that the police used them to determine the time of a murder. Most of them feed on dead organic matter, and few are predators. That's where their love for human bodies came from.

Examples of representatives living in our country are common military and winter snow .

See also: 10 most interesting species of spiders that can be found in Poland

See also: Snake species that occur in our country