The woman discovers that the cat she is taking care of is different. She must always wear a plaster on her head 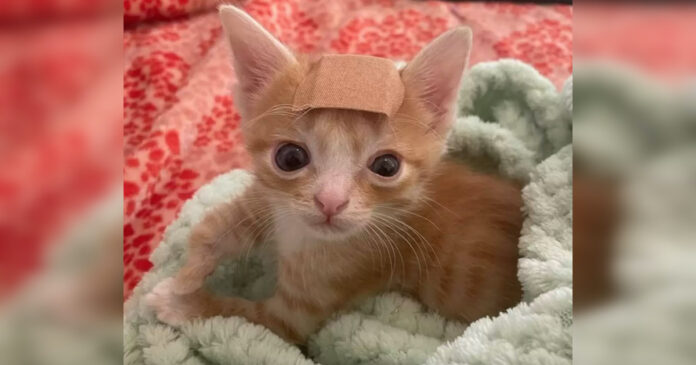 Otter and his sister Bunny were orphans. One day a good Samaritan found them and looked after them. However, it didn't take long for him to realize that these furries were a bit different. So he took them to the Baby Kitten Rescue, where the kittens could get the specialist care they needed so badly.

Cats that were slightly different

Otter was missing a few fingers on his front paws and Bunny didn't have both front paws. Both cats, however, are very determined and are doing very well.

As the felines recovered from other health conditions, Caroline Grace, director of Baby Kitten Rescue, began to notice that Otter was different from her sister.

When they arrived, they were in terrible condition: they suffered from upper respiratory tract disease, they had fleas, they had diarrhea and they were very dirty. Under the care of the vet, the cats were treated, and soon I began to notice that the Otter's head and mouth looked slightly different than that of a typical cat his age. He had a very large forehead and bulging eyes. He also had what looked like an abscess on the top of his head. He was prescribed antibiotics, but they didn't help. – says Caroline Grace.

Caroline she took Otter to a neurologist who diagnosed him with hydrocephalus and a meningeal hernia. The abscess on top of his head is actually the exposed part of his skull. When your kitten is 6 months old, she will be able to have an MRI scan, which will determine the exact extent of her problem. When he is one year old, he will undergo an operation to implant a special plate above the hole in his skull. By then, the people who looked after him had learned to improvise!

Otter wears a plaster and a helmet to protect his brain. – admits Caroline Grace.

Nothing can stop them!

Since Otter came under Caroline's roof the woman covers his head with a plaster. He is such a small kitten, so he looks even more cute with the patch on his head! Caroline's friends also made him a custom helmet to protect his head while having fun. This allows the furry cat to enjoy the life of a cat.

Despite their disabilities, Otter and Bunny seem to have no idea that they are different from other kittens. They love life with their foster mother and so far have not let anything slow them down.

Otter is brave and inquisitive, but also very affectionate and loving. She loves discovering new places, things and people. Usually he is the first to try something new while Bunny is watching everything. When Otter shows Bunny it's safe, she'll try it too! Otter is the older brother and definitely cares about his sister. Bunny had to learn to adapt to her disability by standing and walking on her hind legs, and then Otter also began to do the same … Both Bunny and Otter adapted very well to their disability. They don't know they are different. They are filled with joy. – explains Caroline Grace.

Otter and Bunny are together very bound, so when they are ready for it, they will have to be adopted together. This, however, will take some time. They will definitely need a family that is experienced in caring for animals with special needs. 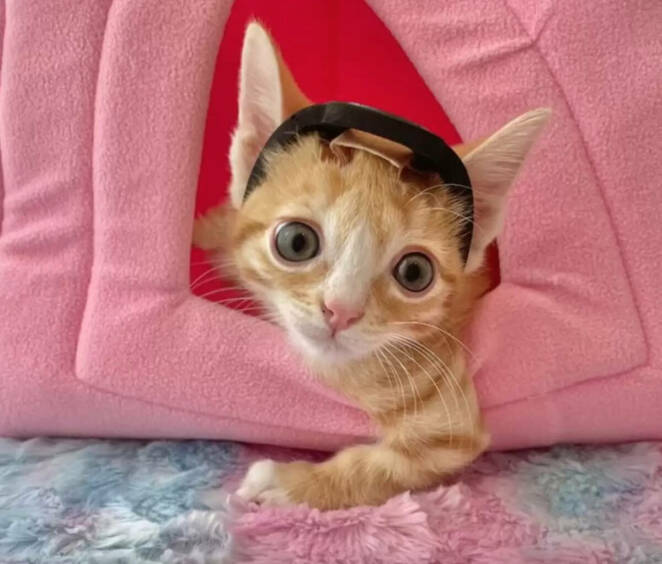 The Otter may look a little different with a patch and helmet on its head, but the most important thing is that it keeps it safe. Plus, it makes it look even more adorable! Otter is very happy to discover the world and looks forward to more adventures!

Facebook
Twitter
WhatsApp
VK
Previous articleThe cat is raising a single kitten, and, – the good news! They don't even have to be apart
Next article15 dogs that have changed so much after a haircut that the owners did not immediately recognize them as their pets