The librarian was shocked when she came across this creature. He was sleeping on a bookshelf 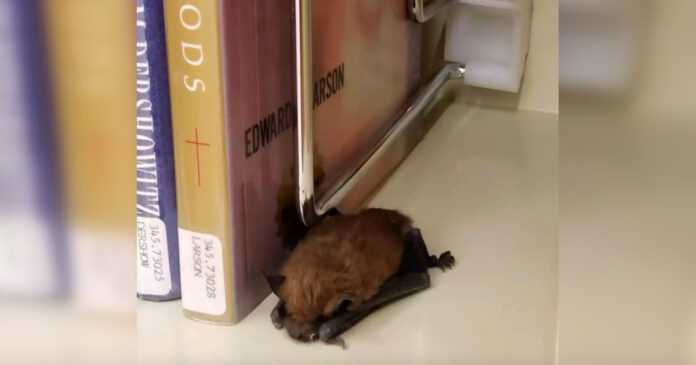 One day a librarian at the Camas Public Library was putting books back on the shelves when she suddenly found a creature sleeping in a quiet corner of one of the departments. It is true that someone dozing curled up with a good book is not unusual, but finding a sleeping bat in the library is unlikely to happen often …

Unusual guest in the library

Our librarian did not want to disturb him. Wanting to be 100% sure that it was indeed the bat sleeping on the bookshelf, she went to call the other librarian to have her look at it too. Says Connie Urquhart, the director of the library.

He was extremely calm and easygoing in this whole situation. He even let us take a picture while posing with a book called Bats in the Library by Brian Lies. Then Officer Bryan Caine safely moved it to the box. – says Connie Urquhart.

He is now at large

It is still unclear how the way the bat broke into a nap in the library. Interestingly, in some libraries in Portugal, bats are even welcome visitors as they feed on pests that could otherwise eat books. However, the Camas Public Library did not require the services of a baby bat, and it was released into the wild at the nearby Steigerwald Lake National Nature Reserve.

Library open to all

For staff, this was one of many visits by animals to and around the library. They were already visited by squirrels, bats, cats, hares and other creatures. The library is open to everyone, willingly sharing the joy of reading with anyone who visits.

We live in a crazy and a wonderful little town. Added Connie Urquhart.