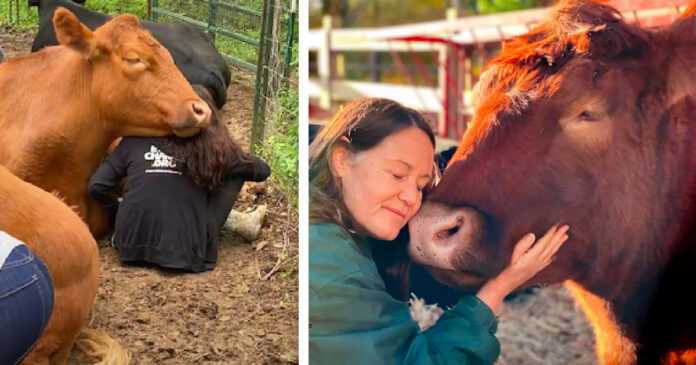 Chico is a cow known for her playfulness, but even the most goofy little creatures need a nap every now and then – and it's best to do it in the arms of your best friend!

Saved from Slaughterhouse Before His Death

Chico arrived at The Gentle Barn, an animal sanctuary, after being rescued from a slaughterhouse in 2017. Since then, he has become the true leader of the barn.

Chico is extraordinary. He is a true leader who tells others what to do but also protects them. He is wise, courageous and extremely loving. – admits Ellie Laks, founder of Gentle Barn.

Cow with the soul of a leader

When Chico arrived at the sanctuary, it was immediately clear that he had the soul of a leader. The other cows immediately followed him. Ellie knew that if she wanted to gain the trust of all animals, she would have to gain Chico's trust first. Fortunately, it didn't take long before he began to eat from her hand and let her cuddle and pet him.

Chico is independent and loves to run in the snow in winter. However, when the playtime is over and Chico is tired, suddenly this big and strong pet becomes soft, warm and affectionate. It became quite clear when he once fell asleep on the shoulder of one of the volunteers.

As Ellie Laks admits, when cows learn to trust people, they become very loving and affectionate

When they come to us, they first have to recover full health. Then they learn to forgive and trust. They then lie down next to us and let us hug each other. They often wrap their necks around us or put their heads on us. – says Ellie Laks.

Currently, Chico rests in the pasture with other Gentle Barn cows such as Johnny Cash, Eddie, Houdini and Roo. Chico has plenty of room to run in his new home, and if he gets tired, he has plenty of napping arms at his disposal!

Facebook
Twitter
WhatsApp
VK
Previous articleUnrealistically beautiful birds that seem to have arrived from another world
Next articleThe owner tied the dog in the park, and she went abroad