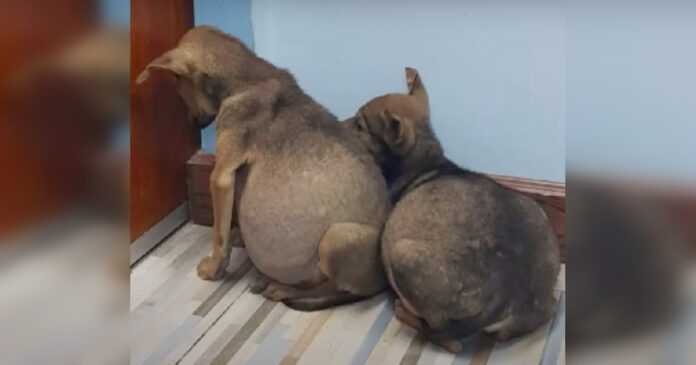 Instead of living in a loving home, they had to fight for their life on the streets. These two puppies were found in terrible condition. The most shocking thing was their unnaturally bloated stomachs, which became gigantic and looked like balloons. Nobody knew if these dogs could be saved at all …

Two puppies with giant bellies were found on the street. At the time of discovery, the dogs were virtually unaware and had serious injuries on their bodies. Looking at their condition, it was suspected that they might have been the victims of some terrible animal experiments. At first, no one knew if they could be saved at all.

The puppies were taken to a veterinary clinic, where they received urgent medical care. It turned out that both dogs were seriously underweight and had low levels of albumin, which are proteins found in blood plasma, among other things. When levels are too low, fluids can pool in the abdomen, causing swelling.

Being underweight and too low in albumin were not the only problems of these little ones. On site, the vet also discovered that the puppies had lots of ticks and parasites. They also suffered from anemia. Dogs needed extensive treatment, including blood transfusions, to fully recover.

A very important step was to remove the residual fluid from the bloated bellies, but this could only be done during difficult surgery. The puppies were prepared for the procedure and then anesthetized. During the operation, one of the veterinary technicians held the dogs by their paws to give them support. Fortunately, the removal of the fluid was successful.

They were getting better every day

These puppies were so brave all the time! As the days passed and the numerous blood transfusions passed, the dogs began to have more and more energy. Soon they started eating normally and having fun again!

When the dogs' health improved, they were transferred to a foster home. Soon the vet confirmed they were ready for adoption!

Facebook
Twitter
WhatsApp
VK
Previous article15 photos of huge domestic cats, whose fluffy magnificence can be seen from afar
Next articleKitten with tiny body and strong will undergoes miraculous transformation