Huge snails the size of a human head. They really exist and are gaining more and more fans 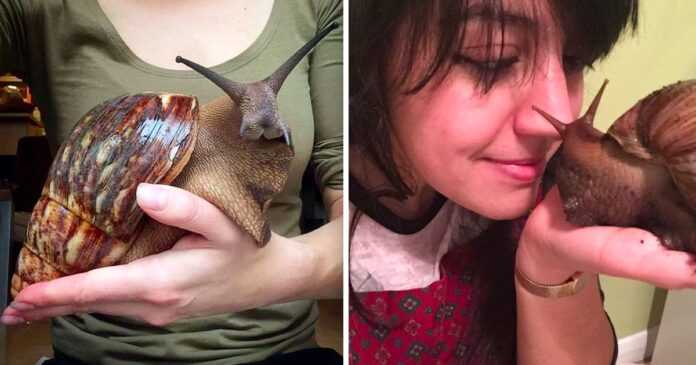 We all know snails well and have seen them many times in our lives. They like to slowly move along the pavement and leave traces of sludge behind them. Okay, that's nothing fancy. However, in this article, you will see something that may surprise you. I'm sure you've never seen a snail this big before, the size of which is almost the same as your head. That's right, such snails do exist and are called African land snails. While they are native to Africa, they inhabit all other continents except Antarctica. They thrive in hot and humid places.

This is the African Land Snail

Its dimensions are impressive

The shell of such a snail may be up to 20 cm long, 10 cm tall and weigh approximately 32 grams. Many people keep representatives of this species at home and treat them as pets. In this way, they have already gained a lot of fans around the world who boast about photos of their pupils on the web. Still others catch them and kill them for consumption.

In the United States, keeping these snails at home is illegal due to their high level of harmfulness . While they look innocent, they have caused a lot of damage to crops in states like Florida. Florida spent a million dollars to get rid of these snails completely. They were last spotted there in December 2017.

These snails also cause damage to homes, as they often eat stucco, which contains calcium. Calcium, on the other hand, helps keep snails healthy.

African land snails can also carry the parasite that causes meningitis in humans.

Once they have appeared in the area, they may They reproduce very quickly because they can lay as many as 200 eggs at once, producing almost 1,200 eggs a year. Interestingly, each snail has both male and female reproductive organs, so it can interbreed with any one representative of its species.

When one Twitter user shared a photo with her huge snail, no one could believe it was real. It soon turned out, however, that this species has many fans, and people from all over the world began to share photos with their “pets.”

The giant West African snail can grow up to 21 cm long, and live up to 10 years https://t.co/xXBrEBMVru pic.twitter.com/Fl4KgjKxCx

On that note, here's me & our giant African land snail, Cloyd. Who wants a post on Cloyd? #snabbit #giantafricanlandsnail #gals pic.twitter.com/POLEx7bogB

They are impressive, aren't they?

Facebook
Twitter
WhatsApp
VK
Previous articleWonderful and rare miracle: white northern oleshek
Next article15 Pictures Of Cats And Dogs Rescued By Their New Owners And None Of Them Could Hide Their Happiness