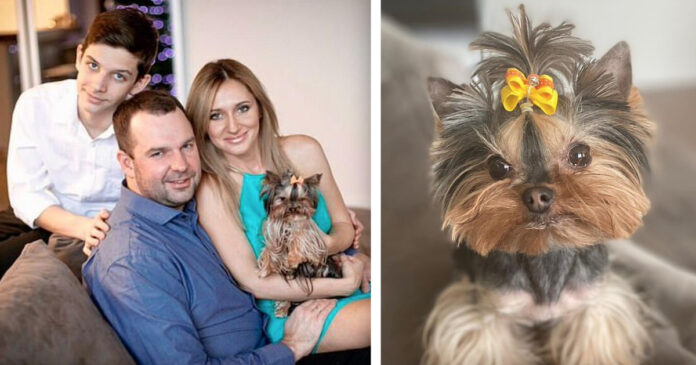 A Ukrainian family who fled the war in their homeland that broke out in their country suffered even more heartache after their beloved little dog was stolen just six days after arriving in the UK.

They fled Ukraine with their beloved dog

Spouses, Lina and Oleksij Litwinowa (both at the age of 40), their children: Ivan (17) and Kira (nine months) and Lina's mother – Larysa (66), for 3 days traveled over 3,200 km in ten countries to escape Russian aggression. The family traveled with an 8-year-old Yorkshire Terrier female named Ellie, whom they had from a puppy.

Just 6 days after arriving in Great Britain the female dog of the family has been stolen. The video intercom camera captured the moment a red BMW stopped in the middle of the road in front of the refugee house, and then Ellie was seen running out.

Lina claims that two people from BMW told passersby that they owned a bitch, and then they picked her up and left.

We are broken. Me and my mom can't stop crying. These things just don't happen in our hometown of Kharkov. But we arrive in England and within a few days Ellie is kidnapped. I don't know why someone stole it. We don't want to punish anyone. We just want our Ellie back. – says Lina Litvinova.

A police spokesman said that no no arrests on this matter, but an investigation is ongoing. We all hope that Ellie will be found as soon as possible and returned to her place, which is to a loving family!

This is not the first time this has happened

In June we wrote about a similar situation. It was then that a little dog named Buddy underwent a shocking test. The dog was waiting in front of a grocery store in Germany where its owner was shopping. Suddenly, however, a stranger came and kidnapped the furry and took him to an unknown place. The owner of the dog, who left the store moments later, was devastated to learn that someone had taken her beloved pet. But then a very determined policeman appeared and decided to take care of the case.

Facebook
Twitter
WhatsApp
VK
Previous articleAmazing mother opossum caught in the frame
Next articleThe pit bull surprised the owner by giving up the kennel to a stray cat. She trusted the dog so much that she gave birth to kittens there.