The upset dog wakes up the owner at night. Moments later, a piece of meteor hits her bed 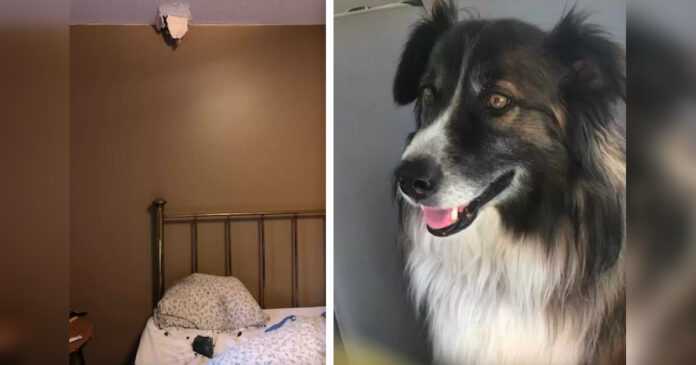 Toby is a sweet and attentive dog who lives in Canada with his mother, Ruth Hamilton. Ever since she adopted him, the quadruped is her best friend and companion. But recently, Toby has proven he is a hero too.

One night, Ruth Hamilton was sleeping in her bed when suddenly, around 11:30 PM, she was awakened by an unexpected sound. It was Toby, acting like he was trying to warn his mom about something.

He barked twice as if to say : “Get up!”. It was very loud barking. Ruth admitted.

And it was lucky that Toby dragged his mother out of bed with a loud bark – a moment later the woman heard click directly over your head!

Something that seems downright unbelievable

It seems downright unbelievable, but it turned out that a large chunk of a meteor flew at high speed through Ruth's house, landing almost exactly where she'd slept before.

Toby stopped barking and I was shocked. I was wondering if all this really happened ?! Says Ruth.

A meteorite crashed over the Earth

Soon other witnesses in the area also confirmed that they had seen a meteorite crash into the Earth that evening. The warning Ruth had received from Toby might have saved her life. But how did the dog know about the threat just moments before?

I was told that there is a bang sometimes when meteors enter the atmosphere . Toby could react to that. Dogs have a stronger sense of hearing than we do. But we can never be sure how he found out about the danger ahead of me. Says Ruth.

Admittedly, Toby always warned Ruth quickly about the sounds of animals outside or approaching cars. But apparently his vigilance is not limited to earthly dangers only!

The hole in Ruth's house will of course have to be repaired, but the terrifying incident could have ended much worse had it not been for Toby, whom she once saved herself.

Toby is a wonderful companion. I love him. My grandchildren think Paw Patrol should do an episode about him. Added Ruth.

Our dogs sometimes act like they have a sixth sense. While you may wonder if they have the supernatural gift of foresight, they are more likely to owe their extraordinary abilities to their five senses. Dog's ears can hear several times better than human ears, and their noses are even tens of thousands of times better than ours. In addition, they live in incredible harmony with the environment and their favorite people, so it's no wonder that they can detect certain situations in front of us.

Find out about 6 situations that dogs can predict even before they happen – click HERE.

Facebook
Twitter
WhatsApp
VK
Previous articleHow do cats perceive the world around them?
Next articleFunny tsutsiki: although they grew up, they remained the same clumsy