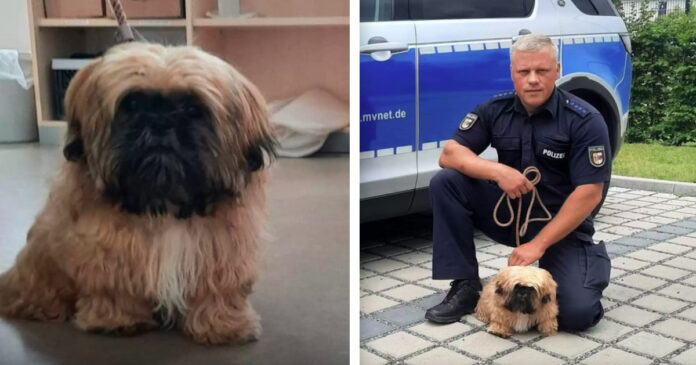 Earlier this month, a cute, shaggy little dog named Buddy underwent a harrowing test. The dog was waiting in front of a grocery store in Germany, where its owner was shopping. Suddenly, however, a stranger came and kidnapped the fur and took it to an unknown place.

Dog kidnapped from the grocery store

The dog's owner, who a moment later left store, she was devastated to learn that someone had taken her beloved pet. But then a very determined policeman showed up and decided to take care of the case.

Escaped since the war, but now he is in danger again

Soon a police officer in Greifswald appeared on the scene to prepare an incident report. There he discovered that the owner of the dog spoke only Ukrainian. Using an online translator, the officer learned that the woman had recently fled to Germany from war-torn Ukraine with her two children and Buddy. The doggie survived this difficult journey, but now he is in a new danger.

The policeman was so touched by this story that he decided to do everything to make sure that little Buddy reaches his home safely.

Our officer interviewed many witnesses on the spot and looked for any clues that would lead him to the dog abductor. The search was unsuccessful at first, but soon there was a turning point. – informs the Greifswald Police.

In his free time, with his own money, the officer printed posters informing about the missing dog, which he hung in the city. However, when he traveled to the local animal shelter to also give them a poster, the matter was finally resolved. A worker there recognized Buddy as an abandoned dog they had picked up a few days earlier. The news that he had been kidnapped was a real shock.

The animal shelter workers themselves could not believe the story and hand him over to the police immediately. – wrote the Police in Greifswald.

Buddy has been safely found. And thanks to the cop's great commitment, he soon returned to his home!

Five days after he was kidnapped, Buddy's worried owner finally got the message she had been counting on so much. The beautiful day finally came when she met her beloved pet again.

She was extremely happy to see her pooch. It was evident even without words. – added the police department.

Facebook
Twitter
WhatsApp
VK
Previous articleA kind young man rescued five small animals from the thick mud, not knowing who they were.
Next articleA chow-chow teddy bear wandered the snow-covered streets for a month in search of an owner