A cyclist finds puppies abandoned in a hole. “Someone dug a hole and left it for death” 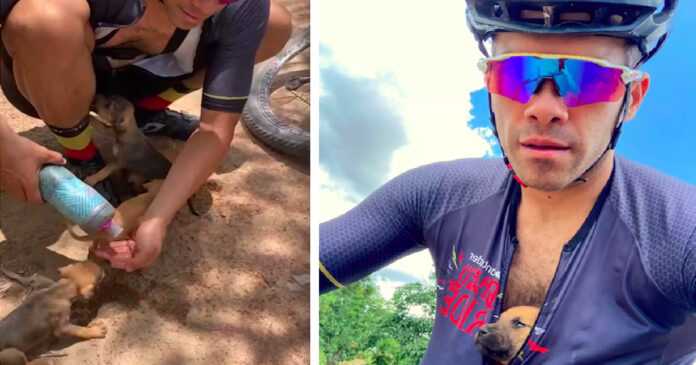 Professional cyclist from Brazil, Thyago Costa Silva, went for a bike ride with a friend. Suddenly, something on the side of the road caught his attention. It soon turned out that there were five tiny puppies in a deep hole. Thyago and his friend knew they had to help.

They were in a very remote place . Someone had dug a hole and left it there for dead. They were weak and were unable to get out of there on their own. – tells Thyago Costa Silva.

A second chance at life

Thyago and his friend started pulling the puppies out of the hole, and when they were all outside, they gave them a bottle of water. Thanks to the cyclists, the little ones got a second chance at life.

They were dying of thirst and hunger. They wanted to live so much. – admitted Thyago Costa Silva.

Then Thyago and his friend put the little ones in their T-shirts and took them on a 19km ride to home.

It was an emotional journey. – said Thyago Costa Silva.

Puppies went to Thyago's house, who helped them regain their strength

I took them home and took care of them. Says Thyago Costa Silva.

The man did something even more for them

They were all adopted by good people who love animals. Thank God. – admitted Thyago Costa Silva.

A great future lies ahead

A sad scene on a remote bike trail it ended in the sweetest way imaginable. The future of puppies saved from death has never looked better!

They will have a great life. I am sure they will be well looked after. This makes me very happy. – added Thyago Costa Silva.